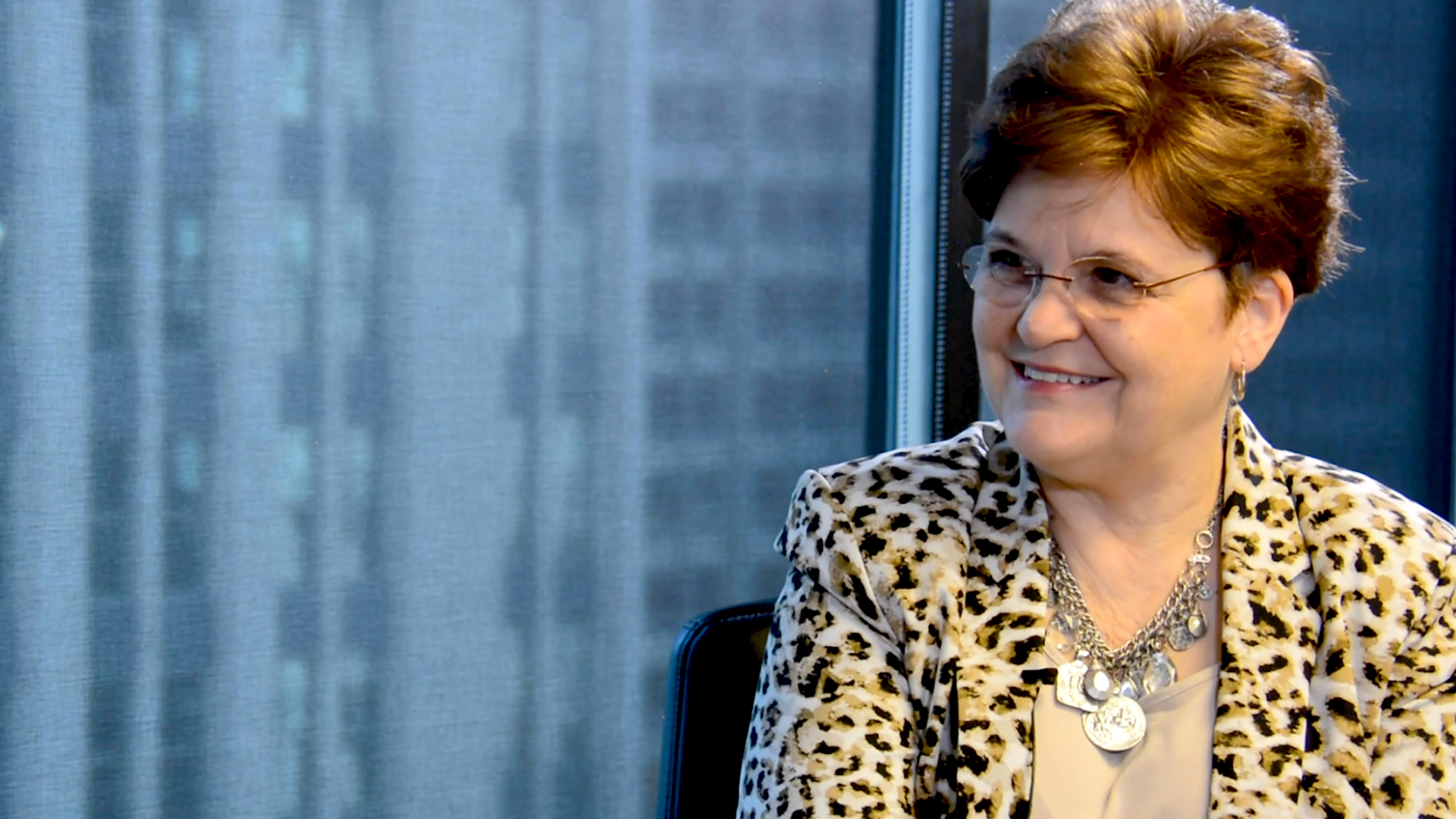 What are the best industry associations? The ones that go beyond simple networking to deliver real thought leadership – idea sharing via conferences, seminars, webinars, podcasts, association publications and the like. But all too often the approach to “thought leadership” is limited to monologue, with industry experts speaking to a topic (or flogging their latest book) in PowerPoint-dominated presentations that keep popping up in conference after conference.

These days, however, the savvy association leader is moving beyond presentations to conversations, tapping the power of their community to strengthen and grow it. One great example is the Chicago chapter of the American Marketing Association – so I sat down with its recent past President, Bonnie Massa (whose full-time gig is as President of Massa & Company, the marketing database and analytics firm) to examine why and how conversation can become a central engine for association growth and member satisfaction. The video below gives a brief introduction to our conversation, which you can read in full in the text that follows.

Chuck Kent:  Thanks for joining me this morning.

CK:  In the interest of full disclosure…I’ve had the pleasure of working with you as a volunteer at the Chicago AMA on programming. Some of that revolved around creating conversations. One of the things I always observed and appreciated, and maybe you can speak to the why of this, is that it appears your view of association leadership is not to be out front as a leader yourself, but to put industry leaders in front of each other for conversations. Is that fair?

BM:  That’s totally fair. I think an association like ours, which is specific to an entire industry of employment, in marketing, needs to make sure that we are connecting all of the people who are on the bleeding edge of what’s going on in Chicago, as well as those who are simply maintaining and doing a really good job every day moving the entire marketing area forward. So yes, our role is to have everybody talking to everybody.

Our role is to have everybody talking to everybody.

CK:  As an association you put on a variety of different programming events, from large conferences to small networking gatherings. I know that at one time, particularly around the BrandSmart Conference, those conversations weren’t being well received. Yet, more recently, as in the latest BrandSmart, conversations seemed to be dominating the programming. What happened? What’s the difference? What makes a panel discussion into a good conversation?

BM: I really like that question, Chuck. I know the period of time that you were talking about, when we sort of went away from panels, and now we’ve come back. What we’ve found over the years regarding panels, whether it’s BrandSmart or some of the smaller ones, is that what really matters the most is the moderator.

If the moderator is unable to harness that conversation among three or four different perspectives, and have everybody stay on point, then panels can be a problem. We’ve gotten some of that feedback before, so we backed off a little bit – and then jumped right back in again, because we started hearing, “We miss panels. Where are the panels?” We learned a little something, and now we’ve embraced them again. But we try to have a variety of agenda types.

CK:  So, relative to conversations, to borrow my own company name as my own plug, you actually have to lead the conversation, you have to have someone at the nexus of that, animating it.

BM:  Yes. In fact, when we put a panel together, typically we start with the moderator.

When we put a panel together, typically we start with the moderator.

CK:  I believe that recently you’ve also gotten way from just the big dais with lots of people behind a table or on a stage to having some events centered around smaller conversations.

BM:  You’re right. As we interview new members we ask, “Why have you joined us? What do you want out of AMA Chicago?”, and one of two things that they’ll tell us is, “I need to build my network”, and the second thing is, “I need to learn. I want to stay on top of what’s going on out there”. Well, that’s about conversation. You don’t have to sit in a room with somebody at the front of the room for an hour listening.

We’ve got a lot to learn from each other. So, we took that “leading the conversation” idea into a smaller format – six people at a table – and put it at Connex [our semi-monthly networking event]. You can build your network and do it at a table of six or seven people where there’s an expert at the table on a topic. Then everybody gets to share what they know.

We’ve got a lot to learn from each other. So, we took that “leading the conversation” idea into a smaller format

CK:  I’m not sure what kind of feedback you’ve gotten from this switch in formats, but having been at one of those recently, having led one of the tables, it seemed like the entire event was more animated and more productive for people. Is that your takeaway?

BM:  We have done it three times now. We started in early 2019 with the new format. We have gotten a larger crowd every single time. Of course, we’re trying to push out a little more to the community that we have these tables now. You were there. How did the table that you led feel? How did that conversation feel to you?

CK:  It was great. You really got to learn from each other. People had an opportunity to get to know each other better, on a more substantive basis.

So, do you see opportunities to extend these conversations beyond the live events?

BM:  The chapter would like to be doing that in more of a group chat online method. We are working on that. But, as you know, with a volunteer organization we can only undertake something that we know we’re going to finish. We’re currently looking for the right volunteer individual to help us start that online conversation, so we can go from any of our events where we’ve started a conversation and take it online, to bring in all of those people who couldn’t attend.

BM:  In our business at least, in marketing, it would be ideal if AMA Chicago’s website, or even the AMA website for the entire organization, is the first place that people think to go to find an article or content on some marketing idea, or some marketing issue they’re stuck on. That I think is the role of any association that’s in a service industry like we are. You need to be the quintessential voice in your industry.

You need to be the quintessential voice in your industry.

CK:  Would you be willing to bring in some thought provocateurs from outside the field? For instance, ours is supposed to be a creative business. Usually creative presentations are by creative director, designer, copywriter types. But would you see a value in bringing in painters, poets, performance artists, to challenge people? Or is that too far afield for what the membership is looking for in terms of the hardcore, “Give me my ROI today”?

BM:  You know, I’m going to tell you what I love about this question. Design has become a hot topic in the last two or three years…

CK:  Marketers are just catching up to the fact that it’s important.

BM:  This is exactly the point that I think you’re making. But the chapter has to do a couple of things. We have to provide the members exactly what they’re looking for. But then we also have to try to be out in front of them, with programming, topics, and things that people may not have thought of.

CK:  So, you need to be willing to challenge your membership as much as serve it?

BM:  Of course, and that’s what I was trying to say. That we have to both serve where they are, and what they need now, as well as bring to them things they hadn’t thought about. And we’ll just have to deal with the fact that we sometimes we’ll have to wait for those audiences [to catch up] and those programs to get bigger.

CK: Thank you – and we’ll leave it with that challenge to associations, to up their game in creating conversations.

About the Author
Chuck Kent, the Chief Conversation Officer at Lead the Conversation,  uses a video-first content creation method to help busy executives more easily create authentic, compelling thought leadership content – and to lead industry conversations. He is a writer, brand strategist, content creator and expert interviewer. Chuck is also a contributor to CEO World, Sustainable Brands, Convince and Convert and Branding Magazine, for which he created the monthly Branding Roundtable.